Global Wood Markets & Trade and Timberland Investments are the focus of our 2011 conference as emerging markets have placed a large demand on all commodities including wood products. Attendees will learn of the current market participants and how to meet the needs of these emerging markets. With domestic consumption of wood fiber at historically low levels, international trade is key to continued growth. Participants at the 2011 conference will include public and private pension funds, private investors, family offices, fund of funds, REITs, private consultants, large landowners, TIMOs, and forest product companies. This diverse attendance base offers participants the ability to learn about every facet of the timberland business and network with representatives from each of these organizations.

Topics for the 2011 Timberland Investment Conference include:

On Tuesday, March 22ndthere will be a pre-conference timberland investment tour hosted by Plum Creek. The tour will visit nearby Plum Creek tracts of land, where Plum Creek professionals and Warnell professors will discuss different areas of sustainable timberland management.The tour will visit different sites and at each stop, we will discuss forestry issues such as active harvesting, log merchandising, silvicultural practices, plantation forestry, and commercial thinning.  Plum Creek officials, along with Warnell professors, will discuss the importance of each aspect of timberland management from a sustainable, financial, and ecological point of view.The tour will take place from 9:00AM-4:00PM and will depart from and return to The Ritz-Carlton.

Kermit Baker is a Senior Research Fellow at Harvard University’s Joint Center for Housing Studies, and is the Project Director of the Remodeling Futures Program. This research effort, which began in 1995, is the first comprehensive analysis of U.S. remodeling activity ever undertaken by the Joint Center. Its goal is to develop an improved understanding of the dynamics of the U.S. repair and renovation industry so that businesses can better take advantage of the opportunities that this market offers.Kermit also is the Chief Economist for the American Institute of Architects in Washington, D.C. In this capacity he analyzes business and construction trends for the U.S. economy, and examines their impact on AIA members and the architectural profession.Prior to joining the Joint Center, Kermit was vice-president and director of the economics department at Reed Business Information where he was responsible for industry forecasting. During his ten years at Reed Business Information he developed the Top U.S. Construction Market Report and served as editor of the Building and Construction Market Forecast newsletter.

Kermit received his master’s degree in urban planning from Harvard University, and holds a Ph.D. from Massachusetts Institute of Technology in the same field. In 2006, Kermit was inducted into the National Remodeling Hall of Fame by the National Association of Home Builders

Danielle DiMartino is a Financial Analyst at the Federal Reserve Bank of Dallas where she briefs policymakers, researches, writes and speaks about the interaction of the economy and the financial markets. DiMartino speaks to audiences nationwide about the origins of the housing and credit crises. Her current speech focuses on the implications of the interruption of the housing market correction.Prior to joining the Dallas Fed, DiMartino worked for the Dallas Morning Newsfrom 2003 to 2006 as a business columnist. Her daily column on the economy and financial markets, with a particular emphasis on the housing market, gained a global audience.Before moving to Dallas, DiMartino was a Vice President at Credit Suisse in New York City from 1996 to 2002 where she worked in the fixed income, equity and private equity markets.

DiMartino’s most recent written work is Fed Policy in the Financial Crisis: Arresting the Adverse Feedback Loop. In addition she has written Fed Intervention: Managing Moral Hazard in Financial Crises and From Complacency to Crisis: Financial Risk Taking in the Early 21st Century, co-authored with Dallas Fed Director of Research Harvey Rosenblum, as well as The Rise and Fall of Subprime Mortgages and Fed Confronts Financial Crisis by Expanding its Role as Lender of Last Resort, co-authored with Dallas Fed Senior Policy Advisor, John Duca.

Born in LeMars, Iowa. B.A. (mathematics and economics), University of Iowa. J.D. (international law), University of Iowa. Member of Iowa Bar. U.S. Navy (attained rank of Lieutenant Commander, USNR).James Olson was a career officer in the Directorate of Operations of the Central Intelligence Agency, serving mostly overseas in clandestine operations. He served as Chief of Counterintelligence at CIA Headquarters in Langley, Virginia. James was the recipient of multiple honors during his tenure at the CIA, including the Intelligence Medal of Merit, the Distinguished Career Intelligence Medal, the Counterintelligence Excellence Medal, the Donovan Award, and several other distinguished achievement awards.James currently works as liaison with the State Department, Treasury Department, FBI, Pentagon, NSC, NSA, DEA, INS, and U.S. Congress. He is also a senior intelligence advisor to several U.S. ambassadors. James is experienced in international affairs, economics, trade negotiations, intelligence support to the military and the law enforcement community, counterintelligence, counterterrorism, counternarcotics, and technical collection systems.

James was assigned by the CIA to the George Bush School of Government and Public Service in College Station, Texas, as an officer-in-residence in December 1997 where he taught courses on Cold War Intelligence, U.S. National Security, and International Crisis Management. Currently, he is a Senior Lecturer and Director of the Certificate in Advance International Affairs Program at Texas A&M University.

Timberland Radio Feature Special Series – IIIHow the TIMO structure has evolved and the challenges that lie ahead since HTRG offered institutional investors their first timberland investment fund, ForesTree One, in 1984

“The University of Georgia’s Center for Forest Business does a superb job attracting a diverse, relevant, and pragmatic group of speakers to its timberland investment conferences.  Furthermore, these events attract a broad array of institutional investors, from the US and elsewhere, interested in the timberland asset class.”Chris Zinkhan – CEO, The Forestland Group

“TIR has been a supporter of the UGA timberland conferences over the years for a number of reasons. First, as a University, speaking engagements are granted based on the expectation that speakers will provide timely and informative educational materials for timberland investors – these conferences are not a series of sales pitches. As a consequence, the UGA conferences tend to be well attended and informative. Also, UGA conferences further the research and educational goals of the Warnell School of Forest Resources. As the leading Forest Finance university in the world, the research and educational programs produced by the university are critical. This mission is embraced by the timberland investment community and investors that are concerned about the long term strategic issues impacting the asset class. These conferences are a way for those professionals to network with industry leaders as well as their peers to learn about the latest developments in the industry.”Tom Johnson – Managing Director, Timberland Investment Resources<
Sponsors: 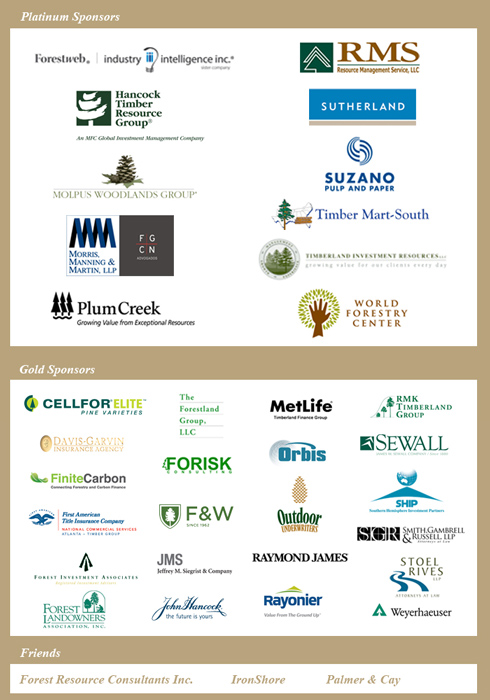